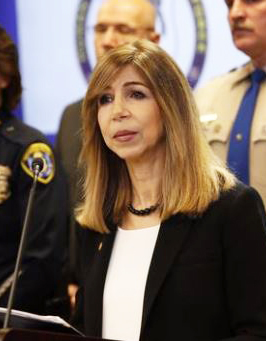 As District Attorney, one of my most serious responsibilities is reviewing officer-involved shootings and deaths which occur while someone is in the custody of law enforcement and force is used. The public is understandably concerned about these incidents and wants information about the facts and circumstances. The loss of life in this context is always somber and serious leaving an impact on many in the community.

The law places the duty and responsibility on our office to determine if there is criminal liability and to make a fair and just decision under the law. Our office takes great care to make sure our analysis follows the law, is independent, objective and thorough. I’ve taken additional steps to include the U.S. Department of Justice, Civil Rights Division, and the Federal Bureau of Investigation in briefings concerning these events because they also have jurisdiction in these cases. I also welcome review by the California Attorney General’s Office, whenever the Attorney General determines it appropriate.

There is often video evidence associated with these incidents, which can include body worn camera, surveillance video, or citizen cell phone video. All of the Chiefs of Police and the Sheriff agreed with the District Attorney’s Office to release portions of the video which show what led up to an officer-involved shooting. We understand the public wants to see these videos so individuals can make their own decisions about whether a shooting was justified. Our office releases the video along with the written analysis to provide important context so the public has a more complete picture of what occurred when a life is lost.

A peace officer’s use of force is a serious responsibility that must be carried out legally and with a respect for the sanctity of every person’s life. Under the law, an officer’s use of deadly force is permitted if a reasonable officer, based on the totality of the circumstances, believes that deadly force is necessary to defend against an imminent threat of death or serious bodily injury to the officer or others. Our reviews embody the fact that police officers are often forced to make split-second judgments in circumstances that are tense, uncertain, and rapidly evolving about the amount of force necessary in a particular situation.

We strive to conduct our reviews in an efficient and timely manner, balancing the process with the time needed for the law enforcement agencies to thoroughly investigate the case. Our goal is to be as open as possible about the review process and our decisions. At the same time, we’re required to follow our ethical and legal duties not to disclose information or evidence until our review is completed. Below are some frequently asked questions and answers about our review process that we hope are helpful.

Yes. A District Attorney Investigator (DAI) with substantial training and experience in homicide investigation and use of force responds to the scene any officer-involved shooting or in-custody death. A briefing of the incident and a familiarization of the incident scene is given to all participating investigators. The DAI will identify any potential witnesses he or she discovers and point out any item of evidence he or she observes to the officer in charge of the investigation. The DAI will not interview witnesses and will not gather evidence. The DAI may provide advice or assistance if it is sought by the jurisdictional agency.

The purpose of the review is to provide an independent analysis of all police shootings and other use of deadly force to determine if the use of force was legally justified or not. In other words, was a crime committed? The review determines if there is criminal liability only and does not examine issues such as compliance with the policies and procedure of any law enforcement agency, ways to improve training, and any issues related to civil liability.

The investigations are lengthy and comprehensive. It takes several months to process evidence, compile forensic and laboratory reports, and conduct follow-up investigation. The Medical Examiner’s report is thorough and cannot be completed until it has toxicology results. As a result, the agency investigations and review by the District Attorney Office often take months. However, San Diego County law enforcement agencies have committed to having their investigations completed within 90 days if feasible, and the District Attorney’s Office has committed to having their review completed within 90 days if feasible.

The Special Operations Division of the San Diego District Attorney’s Office reviews officer-involved shootings and in-custody death cases The investigators assigned to the division are experienced and knowledgeable experts on homicide investigations and use of deadly force. Both an investigator and a Deputy District Attorney review each case.

If the District Attorney’s Office determines there is criminal liability, charges will be filed against the officer or deputy. If there is no criminal liability, a letter is written summarizing the facts, evidence and available statements of those involved. The letter is delivered to the Chief of Police or Sheriff of the jurisdictional agency indicating the actions of the officer or deputy was legally justified. The letter is also posted on the DA’s website where any member of the public can read it.

We are not able to release letters where there is a pending criminal case, which has not been resolved, in order to protect a defendant’s right to a fair trial.

In August 2016, the Chiefs of Police, the Sheriff, and the District Attorney finalized a policy for release of video evidence. This policy allows limited release of law enforcement video evidence along with the officer-involved shooting letter to the media, if the officer or deputy was found to have acted in a legally justifiable manner in the incident. The video evidence could include body worn camera recordings, law enforcement helicopter recordings, dashboard camera footage, private citizen cell phone video, and security camera video footage. The goal in releasing the footage is to explain the circumstances at the time deadly force was used and to be transparent about the analysis of the shooting. The faces of individuals in the video recordings are blurred prior to release.

Generally, video is not released until the District Attorney’s review is complete because it could become evidence in a criminal proceeding.

The District Attorney’s Office will not release video evidence until any criminal case, whether against the officer or another person, is concluded, because it could potentially interfere with the defendant’s right to a fair trial. However, there may be instances where video footage is shown as evidence in a criminal proceeding, open to the public and such video may be seen publicly if it is broadcast as part of the proceedings or made part of the court record. In these instances, the faces of those involve may or may not be blurred.

The Department of Justice (FBI) has started doing a concurrent review of officer-involved shootings to determine if an individual’s civil rights were violated. The City of San Diego has a Citizens Review Board on Police Practices, which reviews these types of incidents to see if policies and practices were followed, as does the County’s Citizens’ Law Enforcement Review Board.

In May 2019, our office announced several initiatives we developed to improve the way law enforcement interacts with people with mental health and substance abuse issues. We’re funding access to crisis intervention and de-escalation training for police officers, and providing a mental health checklist in English and Spanish that families can use when calling 911 to hopefully improve the outcome when their loved one comes into contact with police.

The Office of the District Attorney has conducted reviews of all officer involved shootings (OIS) in the line of duty by San Diego County peace officers since the mid-1970's. In 2006, a revised Protocol for Investigation and Review of Officer Involved Shootings and Other Uses of Force Resulting in Death was was signed by the District Attorney, the Sheriff, the Warden at Donovan State Prison and the Chiefs of all the local law enforcement agencies in San Diego County, including the Border Division of the CHP.

The purpose of the District Attorney's review is to provide an independent review of all shootings and other use of deadly force, fatal and non-fatal, to assure the public that peace officers in San Diego County are performing their duties in a legally justified manner. This review does not examine such issues as compliance with the policies and procedures of any law enforcement agency, ways to improve training, or any issues related to civil liability.

Upon completion of the District Attorney's review, a letter summarizing the facts and statements of the deputy or officer and other witnesses is written and delivered to the Chief or Sheriff. Below is a list of letters submitted by the DA, including the name of the individual involved, the law enforcement agencies involved and the date of the incident.


A copy of the following previously-delivered letters may be obtained from the law enforcement agency that received the letter. If it is not available from the agency, contact District Attorney Communications Director Steve Walker by email.